A game of short mat bowls is contested as either a singles game with 2 players, a doubles match with 2 players on each side, or as a team game with either 3 or 4 players per team. Depending on the rules for any individual match, each player may play with 2, 3 or 4 bowls each. 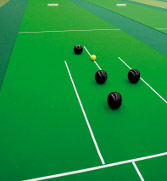 A game takes place on a long narrow mat called a short mat bowls rink, which measures approx 45 feet long and 6 feet wide.
A small ball called a jack is placed at one end of the mat, a block of wood is positioned in the centre of the mat across the middle and a delivery mat is placed at the opposite end to the jack.
All of these must be positioned either on or within specific boundaries which are marked out on the mat by a number of white lines.

With one foot on the delivery mat, each opposing player or team will take it in turns to send a bowl and attempt to get as close to the jack as possible. As the block of wood prevents them from playing directly down the centre of the mat, players must bowl around the wood and avoid touching it. (The purpose of the block of wood is to encourage more skilful play).

Players on opposing sides play their shots alternately until all bowls have been played by all players. This whole process is called an “end.”

The duration of a game of short mat bowls is usually pre-determined where a set number of ends is decided before the match begins.

In games involving more than one person on each side, an order of play is decided for each player on a team. This means that you have a “lead” player for each team who bowls first and a “skip” who bowls last. If there are 3 or 4 players in each team then the additional players are referred to as “seconds” and “thirds.” A second cannot bowl until the lead players for both sides have sent all of their bowls; and this rule follows for the thirds, and skips.

Following the completion of an end, the bowl or bowls adjudged to be nearest the jack score for their respective owners’ team.

As an example, if Team A has a bowl which is nearest the jack, but the second nearest bowl belongs to Team B, one point is scored for that end by Team A. However, should Team A
have the second, third, fourth etc placed bowls for that end, then they score an additional point for each respective bowl.

When the score for that particular end has been agreed, the jack and delivery mat swap places at each end of the rink and the next end begins; with the lead from the team that just scored bowling first.

Once all pre-determined ends have been played, the team with the highest score (sometimes referred to as the most shots) is declared the winner!

Credit for this information goes to
www.shortmatbowls.net

The National Championship Rules can be found on the
ESMBA website